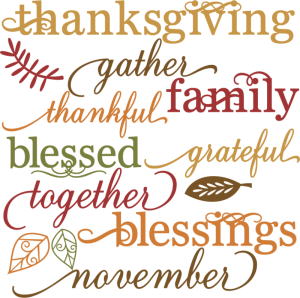 Thanksgiving is the start of the holiday season. Brimming with good food, and quality time spent with family and friends, Thanksgiving is a joyous holiday for many of us, here in Sioux Falls, SD, and across the United States.

Thanksgiving is a day meant for giving thanks, and though this may seem like a natural celebration, the United States is one of a relative few countries to officially celebrate with a holiday.

Unlike many holidays, Thanksgiving is a secular holiday; celebrated on the fourth Thursday in November in the United States. Our northern neighbor, Canada, celebrates Thanksgiving on the second Monday in October, which is actually much closer to the time when harvests were typically gathered. In addition to the different celebration dates, the origins of the two holidays are also different.

Thanksgiving in the United States
Giving thanks for a bountiful harvest is not new, however; the modern day Thanksgiving in this country can be traced back to a celebration at Plymouth in Massachusetts in 1621. This first feast of thanksgiving was inspired by a good harvest, and the tradition was carried on. At first, the colony at Plymouth didn’t have enough food to feed everyone present, but the Native Americans helped by providing seeds and teaching the colonists how to fish, and soon enough, they were able to hold a feast worthy of the name. The tradition spread, and by the 1660s, most of New England was hosting a Thanksgiving feast in honor of the bountiful harvest.

Thanksgiving in Canada
Martin Frobisher, an explorer of early Canada, is given credit for the idea of the first Canadian Thanksgiving. He survived an arduous journey from England through harsh weather conditions and rough terrain, and after his last voyage from Europe to what is now known as Nunavut, he held a formal ceremony, giving thanks for his good fortune and for his survival. As time went on and more settlers arrived, a feast was added to what had already became a yearly tradition. Samuel de Champlain, another explorer, is linked to the first actual Thanksgiving celebration in honor of a successful harvest. Settlers who arrived with him in New France celebrated their harvest with a bountiful feast.

Thanksgiving in the 21st Century
Today, Thanksgiving is traditionally celebrated with all things Americana, from elaborate meals, parades, parties and football games, to kicking off the Christmas holiday shopping season. To many of us, Thanksgiving is roast turkey, stuffing (or dressing), mashed potatoes, and pumpkin pie. No matter how you and your loved ones celebrate this special holiday, take a moment to give thanks for your friends, family, and all the bountiful blessings you’ve received.

Happy Thanksgiving from all of us at Horner Barrow Orthodontics. We are truly thankful for you, our wonderful orthodontic patients!

At Horner Barrow Orthodontics, we are committed to delivering excellent quality orthodontic treatment to each and every patient. To provide a friendly, caring, and pleasant atmosphere that will ensure our patients feel relaxed and confident about placing their orthodontic care in our hands.